THE FIRST WATCH IN SPACE 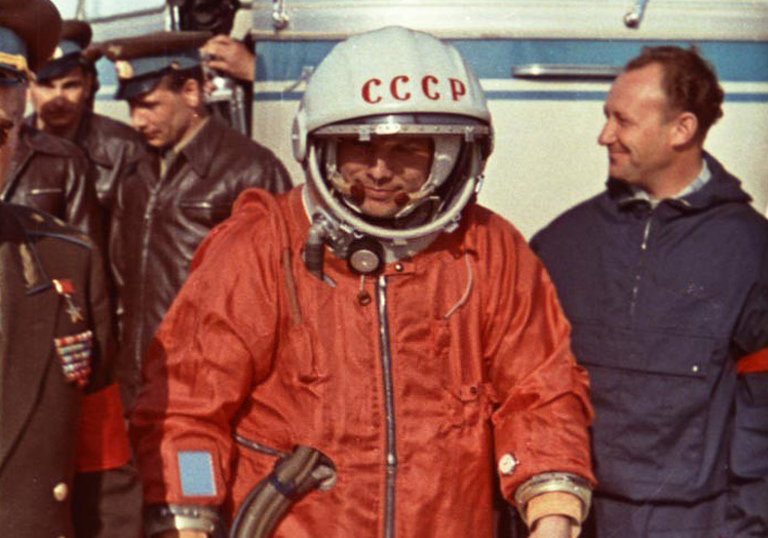 One of the most important questions for those who like watches related to military-air forces, pilots and space aeronautics areas is about the watch that was first to be worn in space. Although the first human space flight, on a scale of history, took place not so long ago, just 60 years ago, the events of that time have already overgrown with rumors and legends.

Let's try to collect all the information about "the first watch in space" and find answers to the following questions: How many of those watches were there? What kind? And most importantly - where are they now? 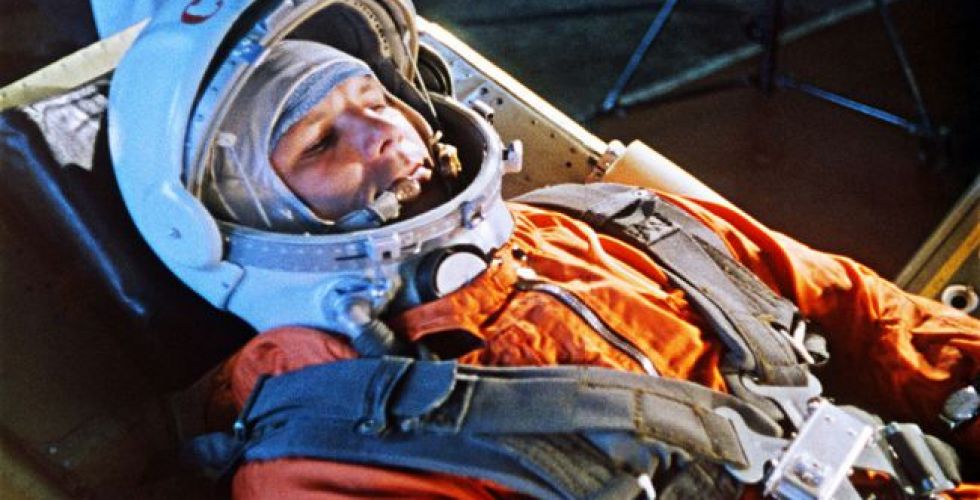 In fact, there aren't many versions, or rather just four, and all of them are associated with the name of the first cosmonaut of the planet - Yuri Alekseyevich Gagarin, because he obviously had a watch with him, and there is a plenty of proofs of this!

First of all, if we look at photos of cosmonauts/astronauts, we can notice that almost all of them wear several watches at the same time - on the flying suits, on the wrist, and often on both wrists. 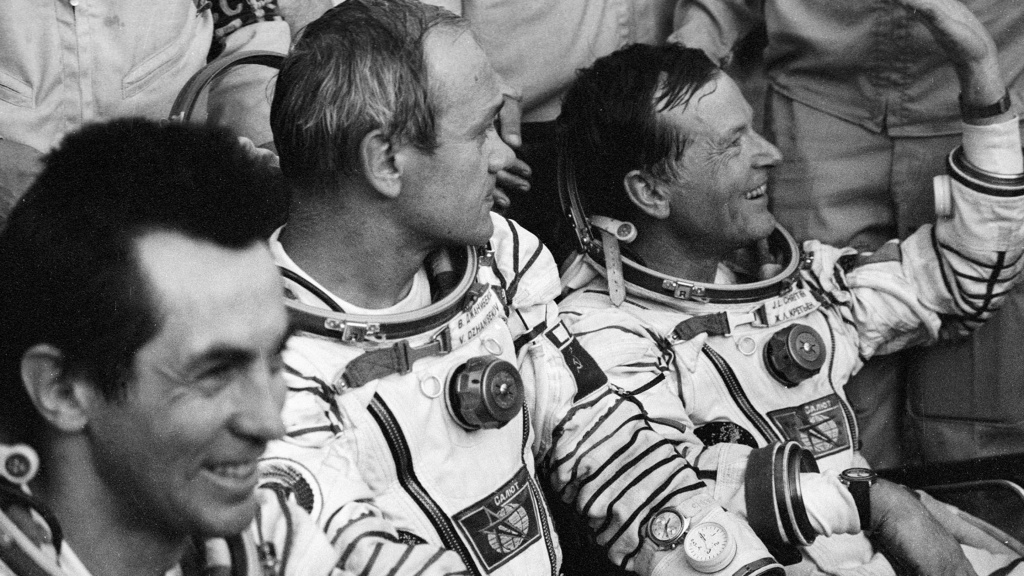 In the case of Gagarin's flight, these points were obviously not regulated at that time, but, being guided by the logic of that era, when the wristwatch was the only and most accurate instrument for determining the time, while being at the same time not the most reliable, especially in the new environment of weightlessness and overloads, we can assume that Gagarin could have had several watches. Surprisingly, no study has ever brought up this theory and all researchers are focused only on one "first" watch.

After all, the watch might really fail, but an astronaut could not do without a watch. Upon landing, the watch could have been the only means for orientation.

So, we would put the question this way: how many and what watches were the first to be worn in space! 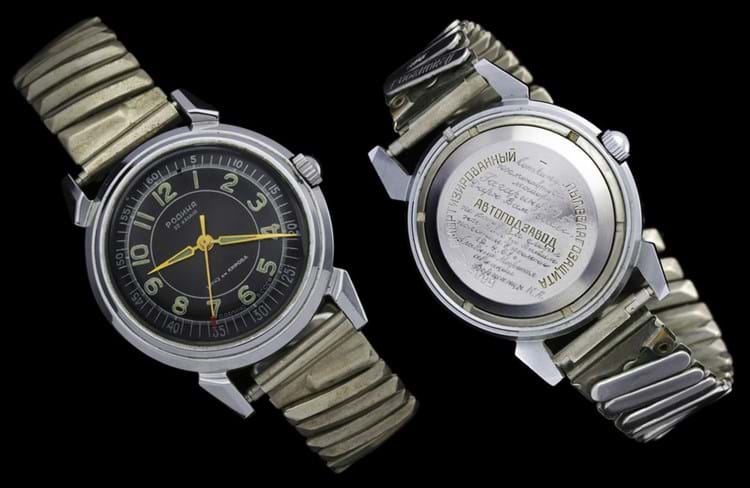 After searching for information, it turned out that the watch sold at the auction was indeed the watch that once belonged to Yuri Gagarin, but it was not the watch with which he flew into space. The lot was supplemented with an accompanying sheet stating the following:

"A gift to Yuri Gagarin from the commander of the Air Force, Marshal Vershinin, in honor of the memorable flight of the Vostok-1 spaceship."

It is obvious that this watch was given to Gagarin after his flight. By the way, this Rodina watch was produced at the First Moscow Watch Factory, same as the Sturmanskie.

It is not known exactly when this watch was presented to Gagarin, but it is interesting that, according to one version, right after his flight, Gagarin presented his watch (the one he was wearing in space) to Marshal Vershinin! A response?

In all the photos before the launch, the watch is well visible on Yuri Gagarin's flying suit. In fact, nowadays the watch is worn the same way, so that it is always in front of the astronaut's eyes when needed.

What happened to this watch after the landing and was it the only one?

Gagarin landed in the Saratov region near the town of Engels (Smelovka village, Saratov region) on April 12, 1961 at 10:55 Moscow time. The first person who greeted Gagarin was the commander of the missile air defense division located near the landing site, Ahmed Nikolaevich Gasiev.

"Then I helped him undress... Gagarin asked me to roll it all up: the spacesuit, the pistol, the watch, and the handkerchief." Given that the watch is mentioned specifically, it is most likely not the watch that was worn over the spacesuit. It is unlikely that it would be mentioned separately if it was a part of the accoutrements.

Gagarin spent just a little time at the air defense division, from where he was taken by car (or, according to other data, by helicopter) to the military airfield in Engels. Unfortunately, it is impossible to see clearly in the photos whether he was wearing a watch or not. 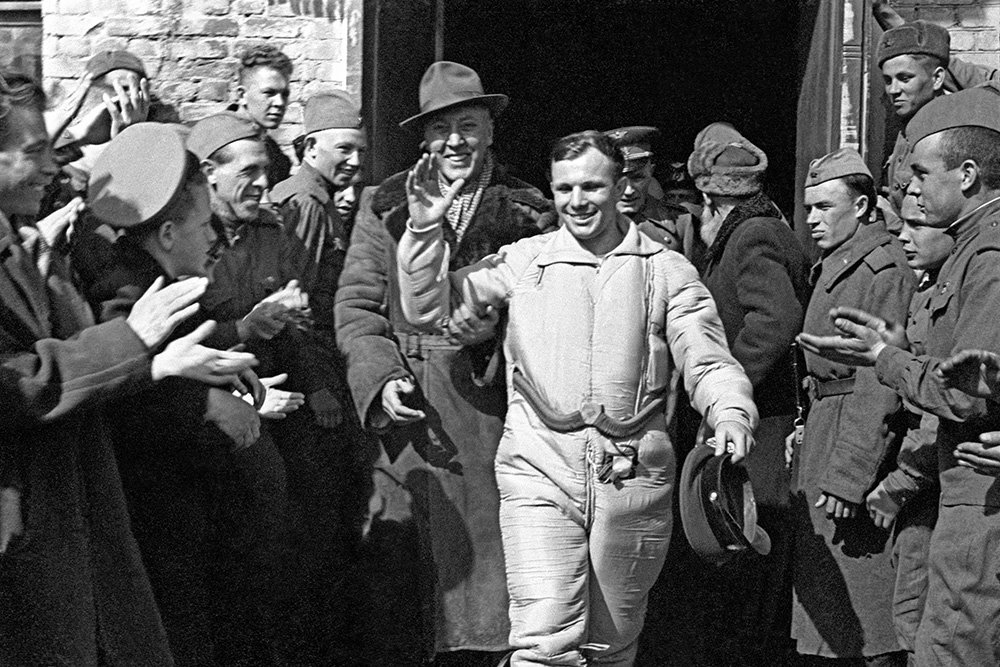 Afterwards, Gagarin flew to Kuibyshev (Samara) from Engels on the same day, April 12, 1961. And the watch on his hand is clearly visible in the photos from this plane: 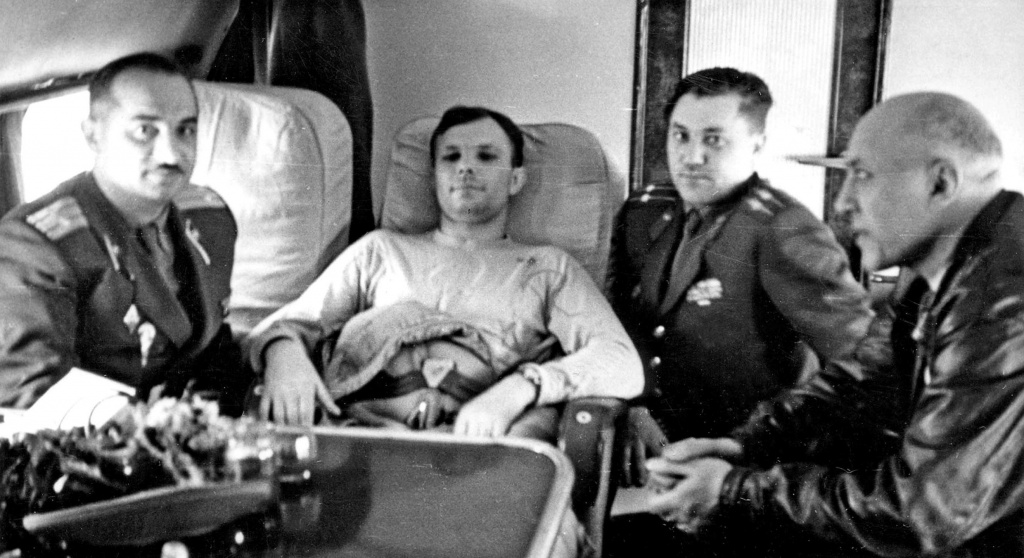 Most likely, it is Gagarin's personal wristwatch.

There is a popular version that the watch did not withstand the overload and vibration and failed right after the start. However, there is a record of Gagarin's report to the State Commission on April 13, 1961, i.e., the next day, which disproves it:

Question (from the members of the State Commission): How did ordinary watches with a clock movement (note: apparently a mechanical watch), both onboard watch and wristwatch, function?

Answer (Gagarin): The watches functioned perfectly, normally; I set them and they are still keeping good time. Popovich Pavel Romanovich has another watch."

That is, everything was fine with the watch; after all, the State Commission is not the authority you wanna lie to.

Interestingly, there is documentary evidence that there was definitely the second watch!

Popovich Pavel Romanovich is one of the astronauts who was preparing for the flight in the same detachment as Gagarin. It is known that the astronauts flew to Kuibyshev together with Korolev, where their meeting with Gagarin took place. It is quite possible that he was the person Yuri Gagarin gave the watch he had been wearing over the spacesuit, which he reported to the commission. The logic is clear - the thing is state-owned, so Gagarin kept his own watch and gave the second watch to his friend to return it to the state.

It would also be logical if this watch would later end up in the museum of the First Moscow Watch Factory - after all, it was probably made under a special order and should have been part of the factory's achievements, and the factory was huge. Who else was there to give this watch to? It was state-owned, a part of the accoutrements; it couldn't be just put in a pocket as a souvenir.

There is another recollection (March 18, 1983) of I.G. Borisenko, Sports Commissar of the Motorsport Federation of the Soviet Union, which, however, is questionable:

"were the first to meet the first astronaut and helped him to take off the spacesuit..."

Among other things, there is a mention of the watch: "Flight logbook, Gagarin's spacesuit, some instruments were loaded into the helicopter"...

"At the ramp of the plane for continuing his journey, he lingered:

"Where's the watch I had? It was sewn on the left sleeve of my spacesuit."

I quickly returned to the helicopter, cut off the watch from the suit, and handed it to the owner. "Thank you," - Yuri Alexeyevich said. - It is very dear to me."

Obviously, in 1983, many details were already forgotten. For example, Gasiev's recollections above, where he states that Gagarin took the spacesuit off in the division, are more credible. However, the information about the cut-off watch is trustworthy - you can't invent such things. Therefore, it could well happen this way.

Especially since it happened exactly between Gagarin's transfer in Engels from the helicopter to the plane, in which, by the way, he was already wearing the watch. But what watch? Let's assume that it was his personal one. It would be strange if he had cared about watches more than anything else at that moment and had rushed to put on the watch from his spacesuit - after all, he had to find a strap for it first! It turns out that the watch on Gagarin's hands is not the one worn on the spacesuit.

It's a pity that you can't understand whether Gagarin had a watch on his hands from the numerous photos taken at the landing site. So there is still a lot of room for versions.

What watch brand was Gagarin wearing when he flew into space?

Everything is clear with the watch on Gagarin's hands - he says its name during the flight to Moscow, during when he was interviewed by the journalists from Pravda newspaper:

- By the way, what instrument did you use to keep track of time?

- It was this earth watch. - Yuri rolled up his coat sleeve and showed an ordinary Sturmanskie watch made by the 1st Moscow Watch Factory.

- And how does it function after the flight to space?

- It functions with pinpoint accuracy! 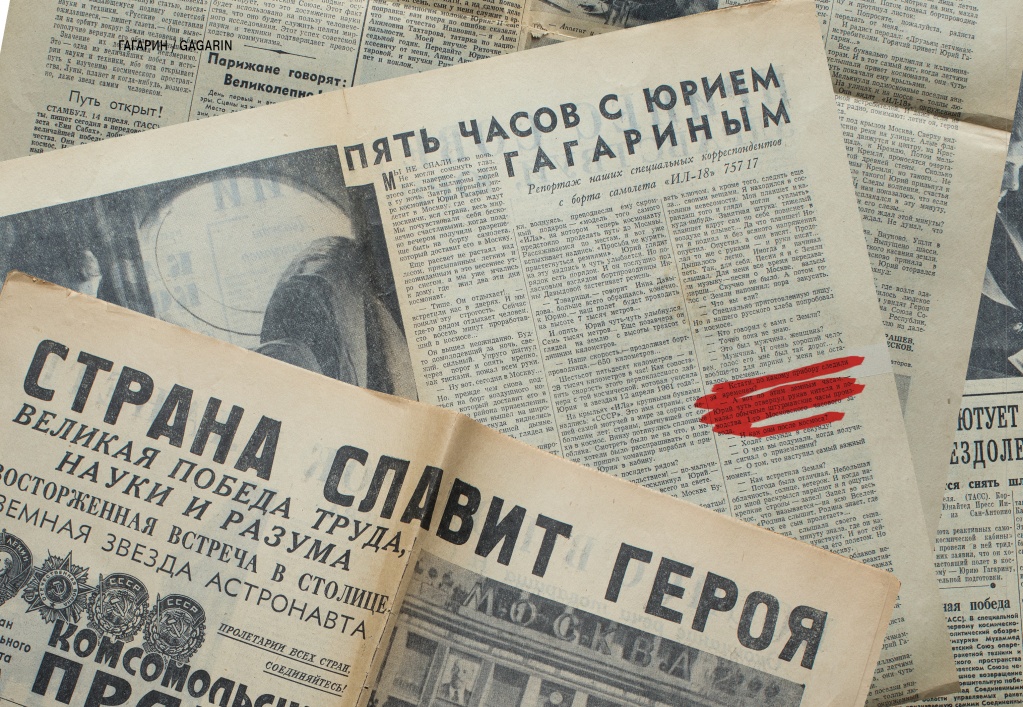 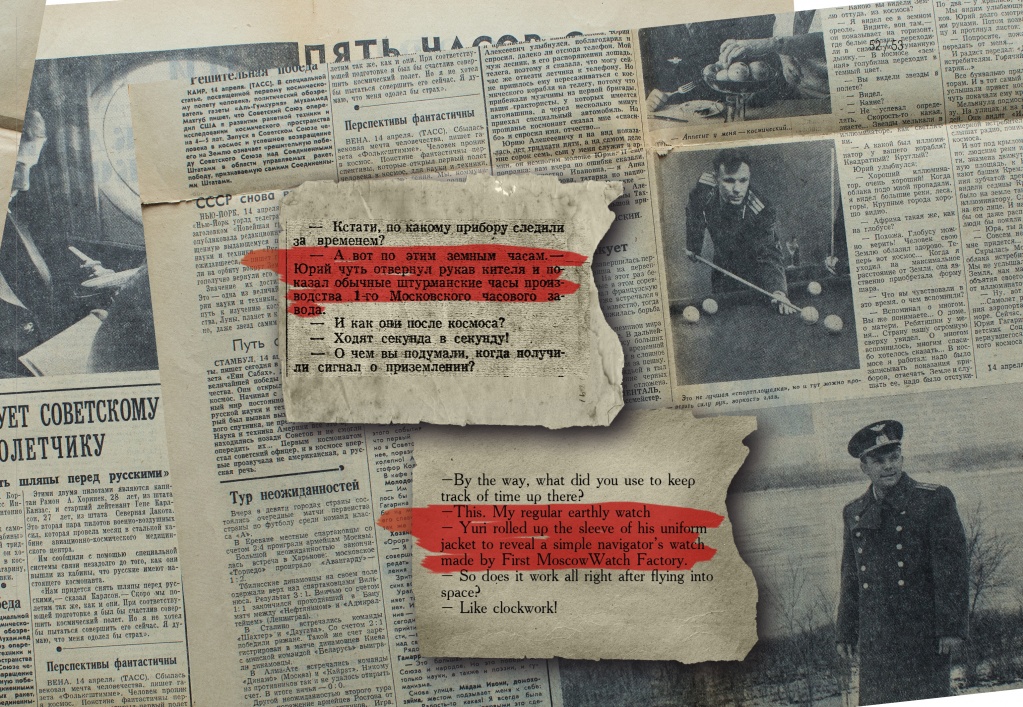 Most likely, this is the watch given by Gagarin to Vershinin a few days later. Years later, Vershinin's daughter, Elena Konstantinovna, gave it to the museum of the Cosmonaut Training Centre (CTC), where it's still kept. It would be interesting to look under the case back of this watch. Theoretically, it should be a Type II Sturmanskie watch dated 1957.

There is much more mystery with the second watch worn over the spacesuit.

There is information about the first watch in space, also Sturmanskie watch, which was donated to the museum of the 1st Moscow Watch Factory. Neither the museum nor the factory exist now, so this information has to be verified.

To summarize, at this point (and this is an interim article and the investigation has just begun), we have the following situation:

1. There are quite a lot of photos showing Yuri Gagarin in his spacesuit just before the flight and the watch is clearly visible on the left sleeve of the spacesuit;

2. There is a picture of Gagarin in the plane which took him from Engels (the closest airfield to the landing place of the spaceship with Gagarin) to Kuibyshev (now Samara). In this picture, a wristwatch can be clearly seen on the wrist of his left hand;

3. There is a comment by Gagarin to the journalists of Pravda newspaper, given by him during his flight from Kuibyshev to Moscow (April 13, 1961), where Gagarin says that he was wearing an ordinary Sturmanskie watch he had used to fly into space;

4. And there is Gagarin's answer to the question of the State Commission in Moscow on 13 April about the watch, where Gagarin talks about the second watch that Popovich had. This fact allows us to assume that Gagarin had (at least) two watches with him in space!

The issue about the first watch, the one on Gagarin's wrist, can be considered closed. This was the Sturmanskie watch produced by the First Moscow Watch Factory, which was given by Gagarin to Marshal Vershinin after the flight and years later donated to the museum of the Cosmonaut Training Center (CTC) by Vershinin's daughter, where it is still kept. We will discuss it in detail in our next article. 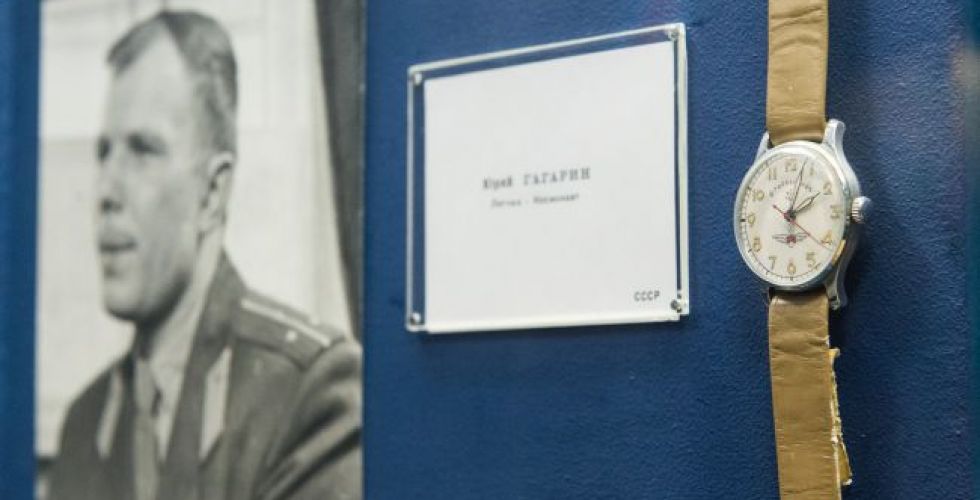 The question that remains unanswered is what was the second watch and where is it now?

We continue our investigation and search both for the watch itself and more compelling evidence for proving our theories.

Stay tuned and read our next article! 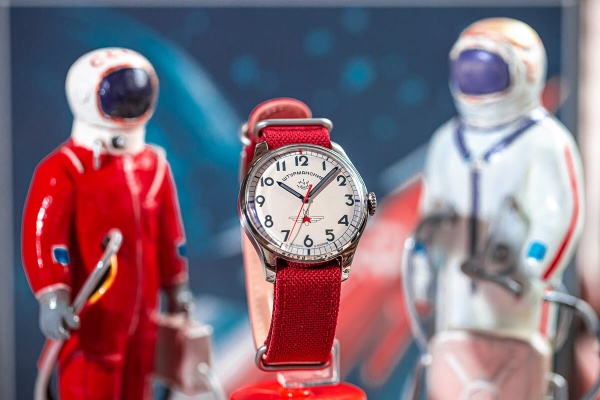 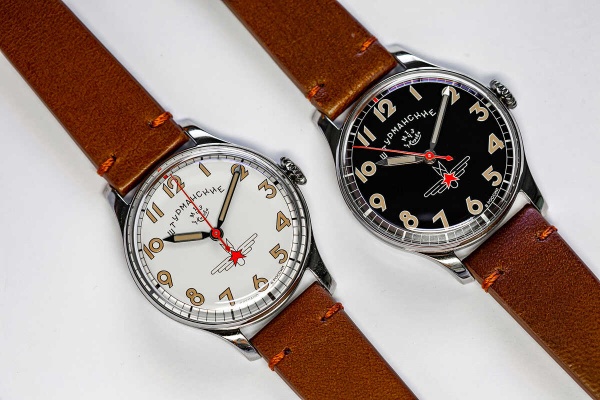 HOW TO DISTINGUISH ORIGINAL STURMANSKIE WATCH FROM A FAKE?
Show more