RELIABLE SIGNALS: THE PAST AND THE PRESENT OF THE “SPUTNIK” WATCHES

The second half of the twentieth century was marked by a chain of major accomplishments of the Soviet Union in the space exploration. Not only history books and the current state of the world's space programs remind about it, but also the remarkable watches produced by the Soviet watchmakers to commemorate the most important events of space exploration. The launch of the first artificial Earth satellite was one of such events …

History of the “Sputnik” Watches Creation

On October 04, 1957 the Soviet Union launched the first artificial satellite into the Earth’s orbit. It was an event of a global scale. The satellite was launched from a test range in Kazakhstan using a similarly-named boost rocket set up as a successor of the R-7 intercontinental rocket. 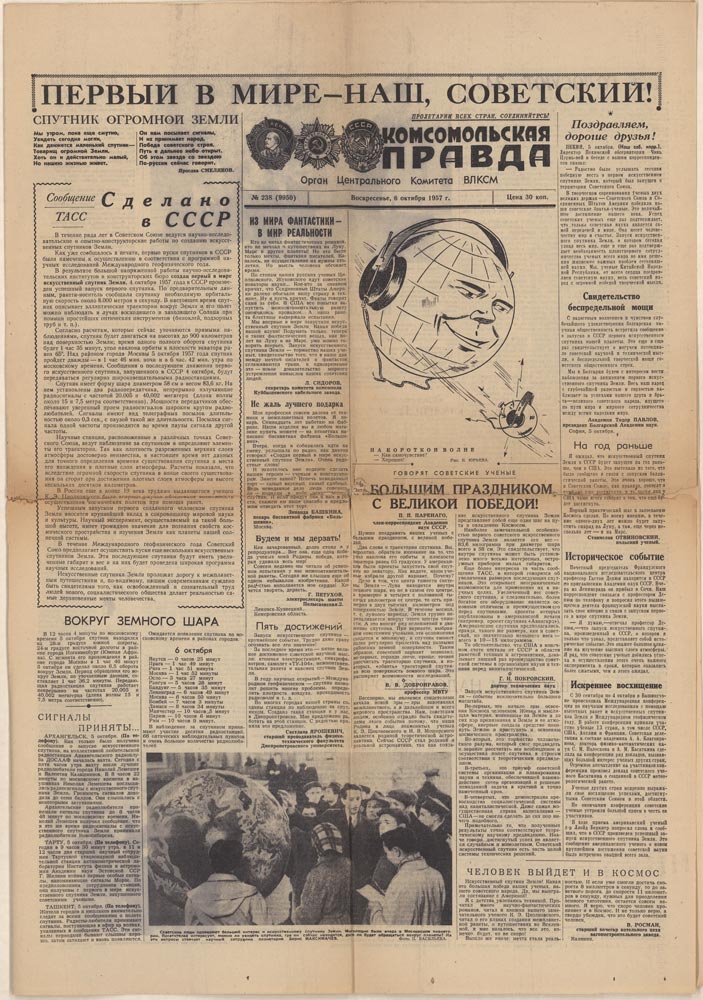 It was a small miracle, weighing 83.6 kg and with a diameter of about 58 cm, discussed throughout the world. The Soviet economy immediately desired to perpetuate this breakthrough — souvenirs and household products in the form of a satellite, bicycles and even vacuum cleaners with the appropriate name appeared.

The watch industry also responded to the success remarkably: the First Moscow Watch Factory (1st Moscow Watch Factory named after Kirov) put an exceptional and eye-catching man's wristwatch named “Sputnik” (model number: 40ЧН) on the market by the beginning of 1958. It carefully presented the said historical event and became a reliable accessory for enthusiasts admiring the first space success.

Unfortunately though, the watches were produced for a very short time — according to various sources from one to several years, apparently until the early 1960s, — and were actively sought for by the enthusiasts both in the Soviet Union and abroad. Even today many collectors dream of obtaining them.

What is so special about those watches?

The “Heart” of the “Sputnik” Watches

By the mid-1950s, the First Moscow Watch Factory mastered the production of the basic movement, which was reliable and precise. During post-WWII years the factory consistently developed this production: the designers used R-26 French caliber as a prototype of the legendary movement of “Pobeda” (“Victory”) watches, and then gradually improved it.

The results of this process were reflected in the ЧН-44М movement — the “heart” of the “Sputnik” watches produced according to GOST (National standards) 6519-58. It has a diameter of 24 mm, steel anchor escapement and 16 ruby jewels. The power reserve of the watch is at least 34 hours after full winding of the spring, and the average daily rate is +/- 45 seconds. 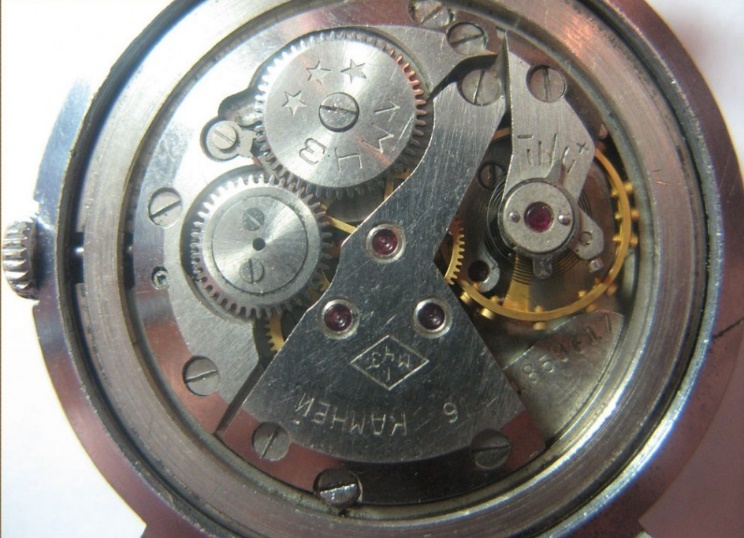 Characteristic Features of the “Sputnik” Watches

The watches had a really bright, out-of-the-ordinary design. They came in several model series, each having unique recognizable features. 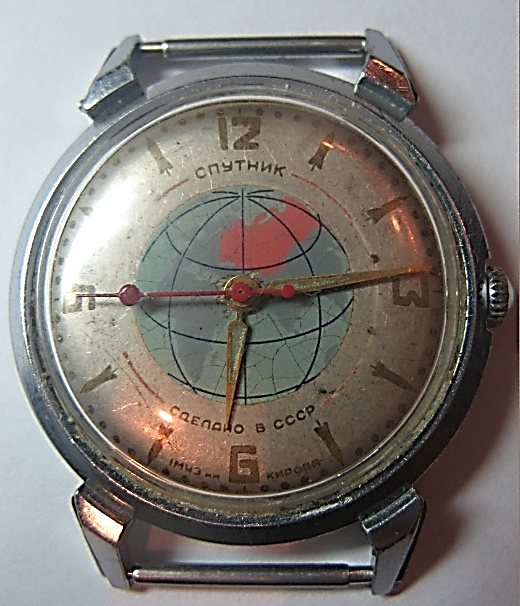 The center of the dial face features the gray-blue globe with the boundaries of the USSR highlighted in red, and a thin line around the globe shows the satellite’s orbit.

The first artificial satellite of the Earth was implemented in two designs:

-         as a red mark on a moving transparent disk instead of a sweep second hand (see the photo below). 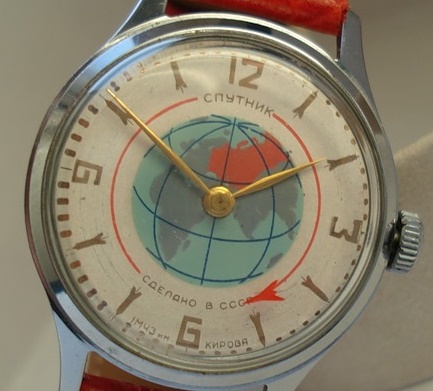 Thanks to such an interesting design, the owner of the watch could always remember the space achievement of the USSR by looking at the hand. But the symbolism of the model does not end there. The hour markers of 3, 6, 9 and 12 o'clock are indicated by numbers, and the indices for the other hours are presented as neat rocket silhouettes.

Elegant geometric indices and simple curved hour and minute hands are perfectly visible and make a vivid impression. The watch case has a diameter of 35 mm. It is small but convenient enough to use. The case back cover is fastened with screws, does not have any inscriptions and is made of stainless steel. The dial face is protected by an organic glass.

There are the following inscriptions on the dial face: “Sputnik” («Спутник»), “Made in the USSR” («Сделано в СССР»), “1st Moscow Watch Factory named after Kirov” («1 МЧЗ им. Кирова»).

To learn about the modifications, let us look at the famous catalogue of 1960 compiled by V.I. Vinogradov. According to this document, the watches were made in the following designs: 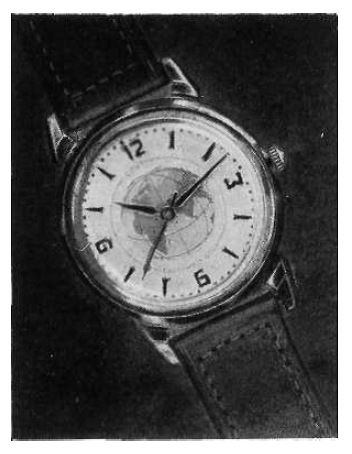 2) ЧН-667К design – the same case but with the black dial face, white indices, signs and inscriptions, and nickel-plated hands. 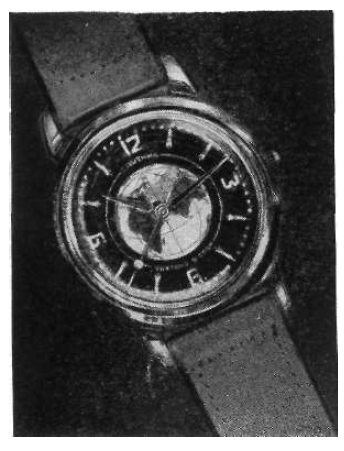 The surviving collectible items can be also found in other coloring, such as gold-plated case, black dial face, and gilded hands. 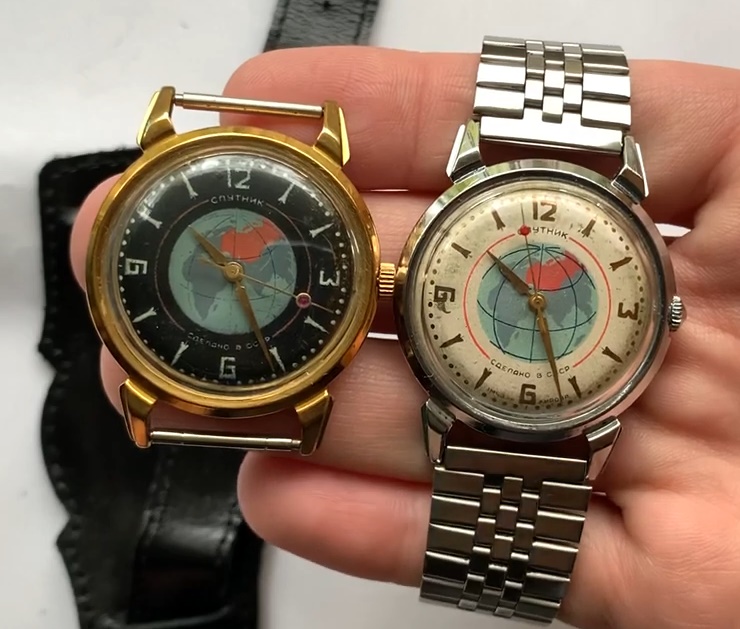 Very few working “Sputnik” watches are left today. More often you can find versions assembled from parts of different years and even different factories, and not only domestic.

But those who love the original model can get a taste of history in a different way and wear an authentic product with a favorite design on the hand...

Today what used to be the First Moscow Watch Factory is still a production facility located in the same area. The watches are produced under the brand name “Sturmanskie” and keep the best traditions of the Soviet watchmaking alive. 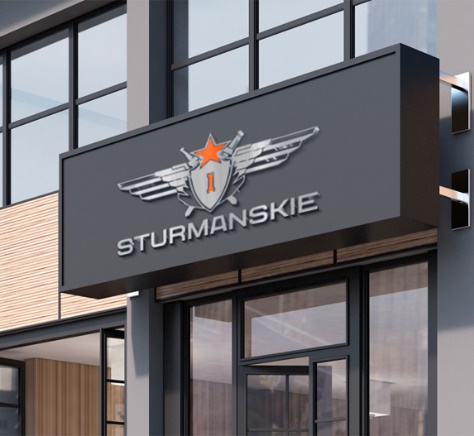 “Sputnik Heritage” watch is one of the “jewels in the crown”. It originated from the historic watch of the late 1950s. 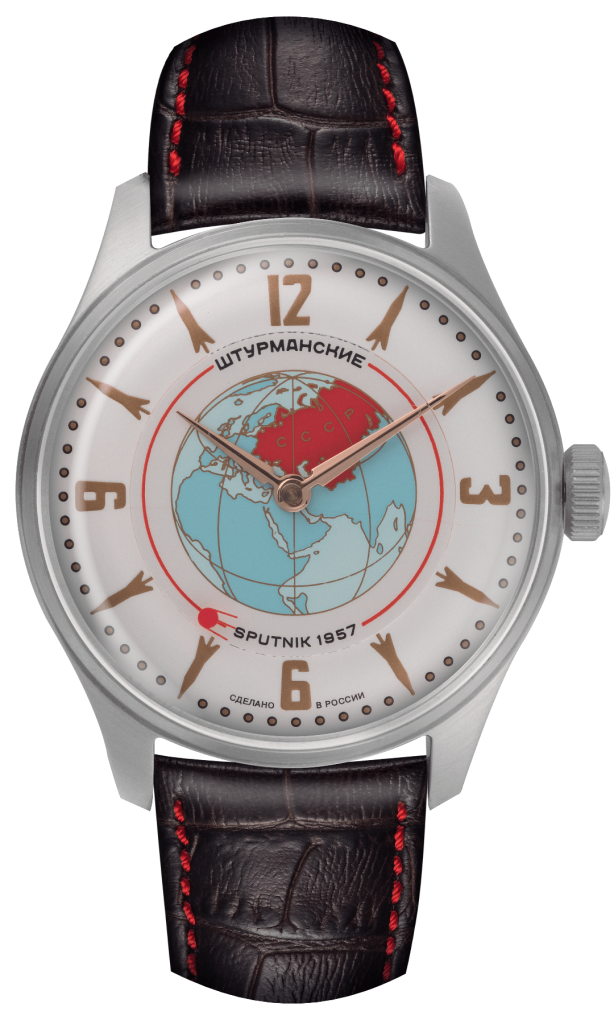 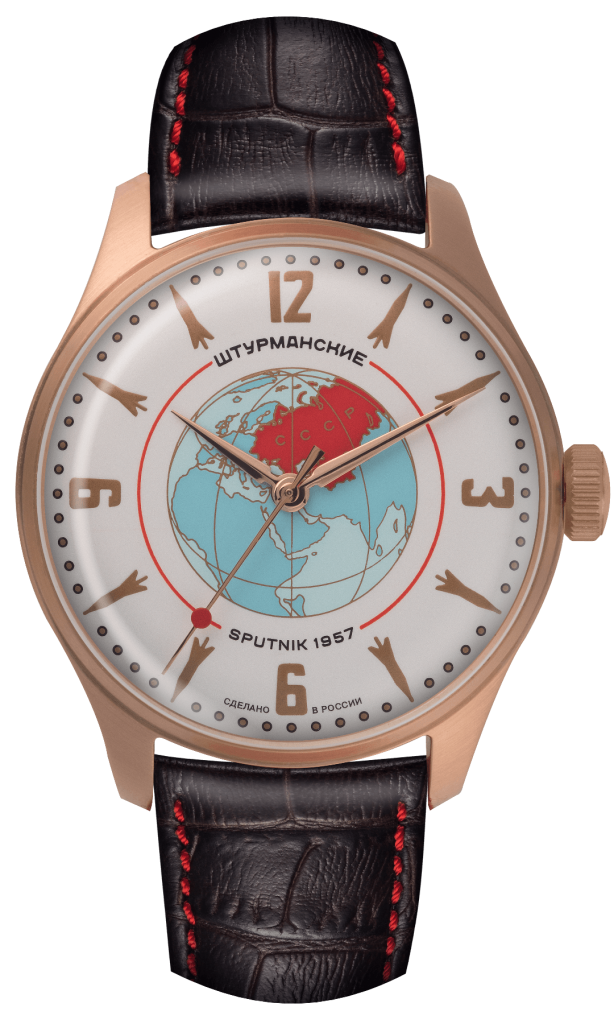 The watches precisely reproduce all recognizable features of their predecessor:

-                   Excellent color scheme and the design of the dial face with the globe, satellite trajectory and the territory of the Soviet Union highlighted in scarlet (now there is also a corresponding inscription “USSR” [«СССР»]).

-                   The historical markings on the dial face have also been preserved: pure indices and elegant rockets help record the time.

The diameter of the watch is a little bigger now – 40 mm; the dial face is protected by a stronger mineral glass, and the hands and indices are filled with a luminescent substance to ensure visibility in the dark. The water resistant case (up to 5 ATM) is made of stainless steel, and the PVD coating is used to create the gilding.

The back cover of the model is not as neat as in the “predecessor” watch: there is a memorial inscription about the event, which inspired the creators of the product. 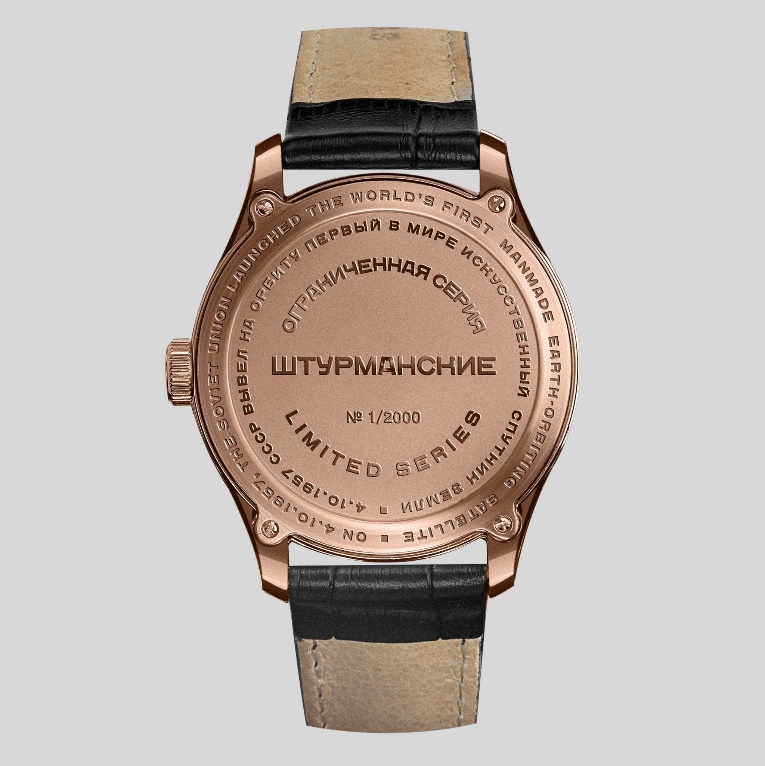 What makes the hands of this elegant watch move? Here lies another wonderful piece of news for those who love Soviet traditions: the watch is powered by the “2609 Poljot” hand-wound movement, one of the longest-lived achievements of the Soviet watch designers. This is an improved version of the caliber developed back in the 1950s, with a sweep second hand and a shockproof balance axis device (which is indicated by figures “09” in the name; “26” is the caliber in mm). The power reserve of the watch is 42 hours. It is reliable and durable.

“Sturmanskie” did not just present a fully authentic “Sputnik” watches, but also diversified the collection with other models, which reflect the original idea and take into account the individual preferences of the enthusiasts:

-                   “Sputnik GMT” model presents a new interpretation of a classical design. They are produced in 6 colors with vintage indices and have a second 24-hour scale for the convenience of travelers. They run on a Swiss Ronda 51524 quartz movement.

-                   “Sputnik Heritage Small Second” model is a tribute to the times, when the watches were produced without the sweep second hand. This opens up new interesting possibilities for the dial face design, and the collection's nine designs demonstrate this perfectly. The model is equipped with a quality Japanese VD78 Seiko quartz movement.

Whichever model of the collection the future owner chooses, each watch will become their good fellow traveler (it is the meaning of the word “Sputnik” in Russian) and will assist them. The watch will highlight the owner’s style and will work for a long time thanks to the sophisticated combination of technology and materials tested in years. OCEAN OF TIME: STORY OF WATCH DESIGNED FOR NAVAL OFFICERS

WATCHES FOR THE CONQUERORS OF THE POLES
Show more