WATCHES FOR THE CONQUERORS OF THE POLES

WATCHES FOR THE CONQUERORS OF THE POLES

In 1955 the USSR approved the project of a complex Antarctica expedition, and very soon, on January 5, 1956, the first Soviet polar explorers landed on the coast of the icy continent; and already on February 13 the Mirny station started its work. By early 1957, the second expedition arrived there, and in the following years active exploration of the Antarctica continued and the number of stations multiplied.

Conditions of life and work of polar explorers near the South Pole were a far cry from normal. According to those who took part in the expeditions, time felt very different there — it seemed to “fly”. The daily routine was also different: unusually lengthy periods of sleep were followed by equally long periods of wakefulness. At times, people literally “lost” days and got confused about dates. To top it all off, came the polar night, which made it difficult to differentiate the time of the day.

In such conditions it was important for polar explorers to have a reliable watch which could help not to lose touch with reality.

A Present to the Conquerors of the Antarctica

The Soviet watch industry quickly responded to the request: in 1956, the First Moscow Watch Factory (1st MChZ), which by that time had been already producing “Sturmanskie” watches for aviators, launched manufacturing of special products for participants in expeditions to the Earth's poles. The watches had a peculiarity — an unusual 24-hour dial with the hour hand making full rotation during the day, which was of great relevance for the polar explorers. The watches were respectively called “Antarctida” and “Severny Polyus”.

Watches with a 24-hour dial had already been produced outside the Soviet Union before that, but some experts believe that it was the Soviet Union where they were first taken to the assembly line.

But, frankly speaking, the Moscow Factory has not produced those watches for a very long time: some say that they had been manufactured only for 1 or 2 years; but in the famous watch catalog of 1960 the models were still presented, and in 5 versions at that. Let us see what was different about them.

The trademark of the “Antarctida” watches was a picture of a ship with the coast in the background above the name of the brand on the dial; and this model was produced in three versions:

- With a black nickel-plated dial with white indices, 60 divisions minute scale on a golden bezel, and gilded hands, and diamond-shaped minute and hour hands. 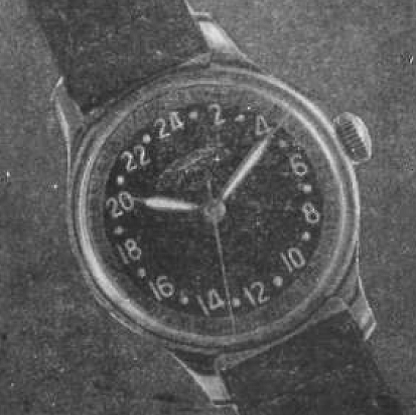 - Similar to the second version, but without the golden bezel, with nickel-plated hour and minute hands, and light-colored seconds. 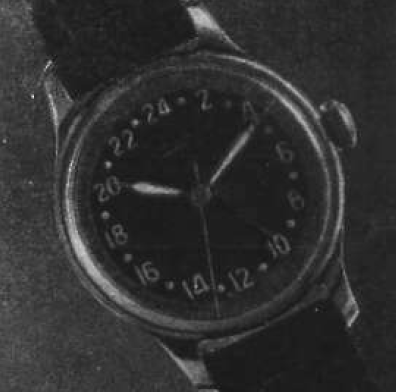 Judging by the collectible items, there were also models with some differences in other years, otherwise the surviving watches might be assembled from different parts:

The dial of the “Severny Polyus” watches also depicted a ship, but under the northern lights, and they were produced in two versions:

Here is one of the surviving samples of the first type:

All versions of the “Antarctida” and “Severny Polyus” watches had some common features:

- dust-proof-and-moisture-proof watch case with a diameter of 33 mm, and a stainless steel back cover that fastened with a threaded ring;

- luminous markers, as well as hour and minute hands designed for ease of use in the dark;

- even-numbered hours on the dial are marked with numbers, odd-numbered — with round indices. 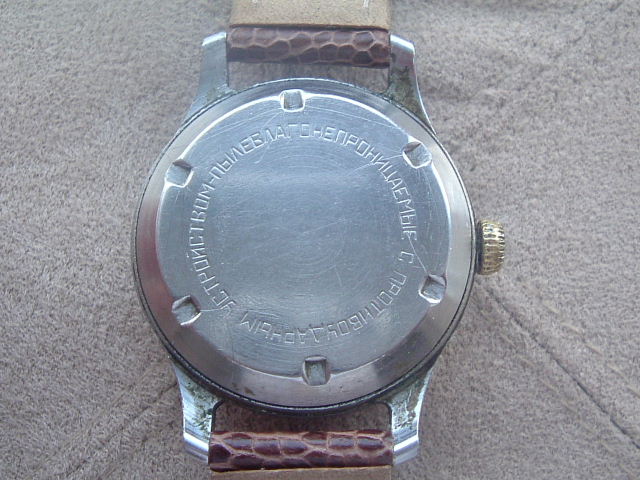 The watches were powered by the ЧН-47М movement. It had 17 ruby jewels, steel anchor escapement and a brake to coordinate the movement of the second hand with the minute and hour hands. There was a balance axis device installed. The power reserve of the watch was at least 34 hours after full winding of the spring, and the average daily rate was +/- 45 seconds.

A little later, in the early 1960s, the First Moscow Watch Factory mastered the production of watches with another important function — complete antimagnetic protection. This function also did not come amiss in usual home conditions, when a mechanical watch could lose its accuracy, for example, after lying for some time next to a TV set. And it made great difference when working in the Earth’s areas with the strongest magnetic fields.

And the watches were named accordingly — “Polyus”, or “the Pole”.

The antimagnetic protection of the movement was provided by placing screens inside the watch — on the front side under the dial and on the back side under the cover — to weaken the effects of magnetic waves. This made the internal arrangement more complicated.

This watch was powered by classic 2409 movement (with shockproof device and sweep second hand), the new version after modification received number 2410, which indicated anti-magnetic properties.

Another area of focus of the factory’s craftsmen was the production of award and anniversary models which were dedicated to various significant events associated with the conquest of the Arctic and the Antarctica, or given as souvenirs to veterans of polar expeditions. Their “internals”, as a rule, had no constructional peculiarities — 2409 and 2209 trusted movements were used, but their unique character was achieved by producing a limited series.

Here are some interesting examples:

- “Severny Polyus” watches also had a 24-hour dial. These watches may have been dedicated to the Soviet research drifting ice station “Severny Polyus-15”, which functioned in 1966-1968.

- Decorative “Antarctida” watches were manufactured on the basis of the famous “Vympel” model, which marked the anniversaries of the cold continent development. The dials of such models had the Antarctica depicted on them, and red dots marked the launched Soviet stations.

But the first pieces of 1956-1957 with a 24-hour dial still hold a special place in current collections of the Soviet watches, and they are hunted for by those who love Soviet traditions from all around the world. However, very few authentic pieces in working condition and without the consequences of tampering have survived into our time.

However, there is another way to get a taste of history of exploration of the Earth's poles and simultaneously become the owner of a functional and reliable Russian watch equipped with a quality movement …

The “Arktika” Watches in the 21st century

Today the “Arktika” watches collection is produced under the Russian watches brand name “Sturmanskie”. It includes the “Arktika Heritage 24 Hours” watches, a worthy successor of the “Antarctida” and “Severny Polyus”, fully justifying its name.

Here is how they look:

It is not difficult to see the characteristic features of the “predecessors” in this model:

- luminescent coating on arrows and indices.

There are also some differences in design resulting from a modern interpretation of the historic model. In addition, the watch is available in a wider range of colors and with different straps, so that the wearer can choose a solution to his or her liking.

The back cover features a pictorial map of the Arctic:

The new “Arktika” watches are bigger than the Soviet model; they are water resistant (up to 3 ATM) and have a diameter of 42 mm. The case of the watches is made of stainless steel, and the dial is protected with acrylic glass.

But the principal difference lies inside the watches. They are also powered by a valued by the experts Soviet movement, only it was designed not by the First Moscow Watch Factory but by Vostok Chistopol Watch Factory. It is Vostok 2431, a self-winding mechanical caliber, which works on 32 ruby jewels and has a power reserve of 31 hours; its average daily rate is from -10 to + 30 seconds. The automatic winding mechanism is equipped with a safety device to prevent the spring from being overwound, and the balance axis is equipped with an anti-shock device.

For those who like the design of the model, but not quite comfortable with the 24-hour dial, the collection presents an alternative — the “Arktika Heritage” watches that are similar in appearance, but have a more familiar 12-hour scale with additional marks for afternoon time and a window for displaying the current date:

The hands of these watches are moved by Vostok 2416, one of the most popular self-winding Soviet movements with a shock-proof device. Otherwise, its performance characteristics are close to the already described caliber 2431.

Finally, there is one more curious model – “Arktika Day-Night” – in this collection. It is an example of multi-functionality: the watch has two hour scales — a 24-hour scale and a minute scale, as well as a window for displaying the current date.

Despite the abundance of information, the dial of the watch looks simple and stylish thanks to the already familiar retro features and the map of the North Pole in the center:

The watches are made of the same materials as the “Naslediye” watches and have a similar size of 42 mm. The movement is also similar. It is a self-winding Vostok 2432 automatic movement.

Each model of the Russian watches  belonging to the “Arktika” collection present a harmonious embodiment of the best traditions of the Soviet watchmaking; and can be both added to the collection and worn in harsh conditions of polar winters or traveling around the world.

OCEAN OF TIME: STORY OF WATCH DESIGNED FOR NAVAL OFFICERS

RELIABLE SIGNALS: THE PAST AND THE PRESENT OF THE “SPUTNIK” WATCHES
Show more